This election cycle is driving me a little nuts.

I don’t know what I should do. Like many in the U. S., I don’t like either of the major candidates for President. Donald Trump turns my stomach, and Hillary is, well, a Clinton, and all the scandal that’s followed them around for so long leaves a bad taste in my mouth.

Here’s the thing, if I’m honest with myself, I have to admit that in both cases my opinion is quite subjective and has been manipulated quite a bit by the respective “other team” for each candidate. So, I decided to try and remedy that situation and look for objective reasons to not vote for one or the other.

It turns out, I don’t have to look far in the case of Trump. All I have to do is listen to him and believe what he says. Here’s a fairly comprehensive list of the vile bile he’s been spewing for the last year or more. Truly, a reprehensible human being.

Hillary is a tougher nut to crack. Sure, as I mentioned above, the Clinton’s have been the center of a whole lot of scandal over the years. This has led to the whole “she’s untrustworthy” meme that’s been floating around for quite a while. That’s part of it, but not all of it. I’ve said myself that when I listen to her, she wreaks of insincerity. All of this is again, quite subjective. If I look objectively at all of the scandal surrounding the Clinton’s, the vast majority of it is conjecture based on flimsy (even made up) evidence. Sure, there’s the whole Monica Lewinsky thing, but that’s not Hillary, that’s Bill. As to her standing by him during all that… the cynic in me says that it was all about power and preserving her political career. But that’s just me projecting a motive on her that I don’t know for sure true. There are many, many married couples that go through issues of infidelity and remain together. Who am I to attach a purely political motive to her?

Here’s an article by a self professed liberal trying to answer the question as to why people hate Hillary Clinton objectively, covering issues such as trustworthiness, and corruption.

Where Do They Stand

The chart below comes from The Political Compass. The site covers world politics (not just the U.S.), is non partisan, and has no sponsors (it survives through individual donations).  It has a survey that you can take (and you should) which places you into a cartesian plane with one axis representing economic issues and the other social. The placement of the candidates in this plane comes from statements made in public:

… the positions on the chart are based on speeches, manifestos and, where applicable, voting records .If positions markedly change during the campaign, we will revise the chart accordingly. Already the positions of Trump and Clinton differ slightly from the primaries chart.

Which political quadrant does your candidate occupy?

Where do I Stand? 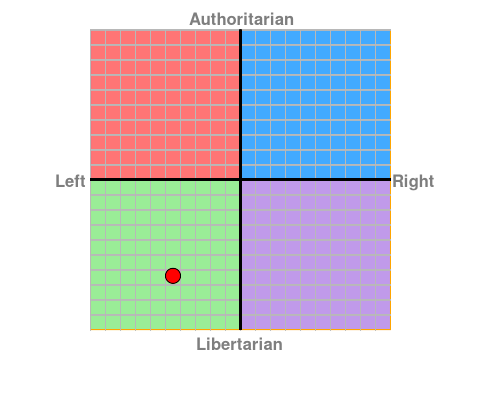 I took special care  to answer each question with how I honestly think things should be. You should take the test too. Take the time to answer for yourself, not your party affiliation. That’ll give you an objective baseline for how you should consider voting at leat.

It seems that I’m getting more left wing in my old age (which is kinda backwards I know… people tend to get more conservative as they age), but about the same in terms of authoritarian vs. libertarian. That is, I’m solidly libertarian —  I believe that the guiding principle of our democracy is freedom in all things, whether social, fiscal, sexual, recreational, relational, etc.

So, if we just look at the cartesian coordinates for the two main candidates, who’s the closest to me? Two things jump out to me:

When all is said and done with all of the above, I’m feeling better about choosing Hillary than I did before.